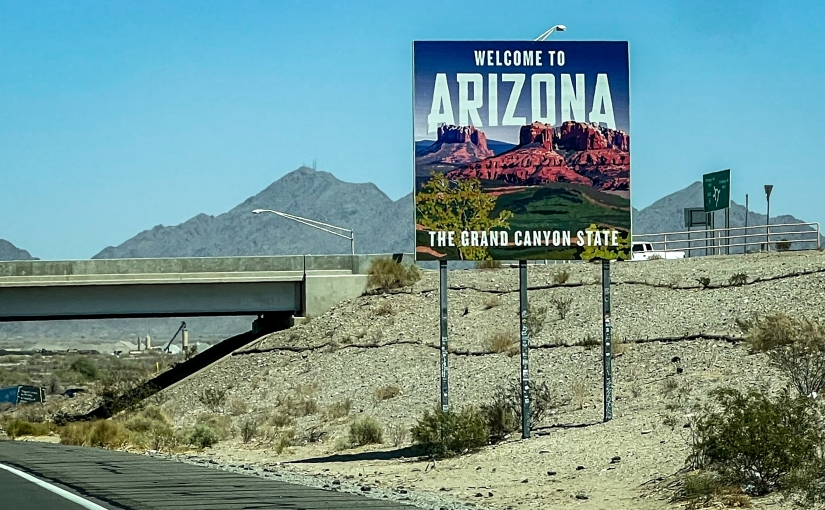 On Monday, 5/9/22, Rich Brown and I (Jim Gain) rendezvoused in Turlock, CA to begin Operation PhotoTrogon. Our target lay deep in the canyons of the Santa Rita and Huachuca mountains in SouthEast Arizona. With plans to traverse the most treacherous terrain filled with cold-blooded reptiles, sharp-spined Saguaro and crafty Coati we departed before the break of dawn.

Counting gas, food and restroom stops, the drive to Tucson is long and tedious and the route options are limited. With an eye for not over-exerting ourselves and getting into an energy deficiency before we even start birding, we opted to stay the first night in Buckeye, a suburb just west of Phoenix. Given that the traffic was best after the morning commute, we decided to leave Turlock at 6:00 am. Our non-stop conversation about all of the exciting target birds we hoped to encounter made the first leg pass quite quickly and after checking in at the Holiday Inn, we went exploring to see what desert birds might be nearby. Looking over the nearby eBird hotspots, we chose the Robbins Butte WA and headed south of town.

First bird was a Eurasian Collared-Dove, and then a Mourning Dove and then more Mourning Doves. Then a dove with bold white racing stripes on its wings came flying by, our first White-winged Dove of the adventure. Then a Phainopepla was spotted, and then another one.

And then the first of two Greater Roadrunners hopped up along the side of the road, gave us a wary look, and then flew across the road and into a nearby Mesquite tree. Thoughts of “Roadrunner, the coyote is after you” and “BEEP, BEEP!” went through my head.

We found a small group of songbirds which included two female Wilson’s Warblers. After an hour we headed back to the Sundance Golf Course by the hotel hoping to catch some Lesser Nighthawks cruising the pond as we did back in January of last year.

As expected just at sunset, three Lesser Nighthawks suddenly appeared at the far end of the pond and we watched them until it got dark. An enjoyable and relaxing first afternoon of birding Arizona.

Next Stop: Sweetwater Wetlands outside of Tucson.